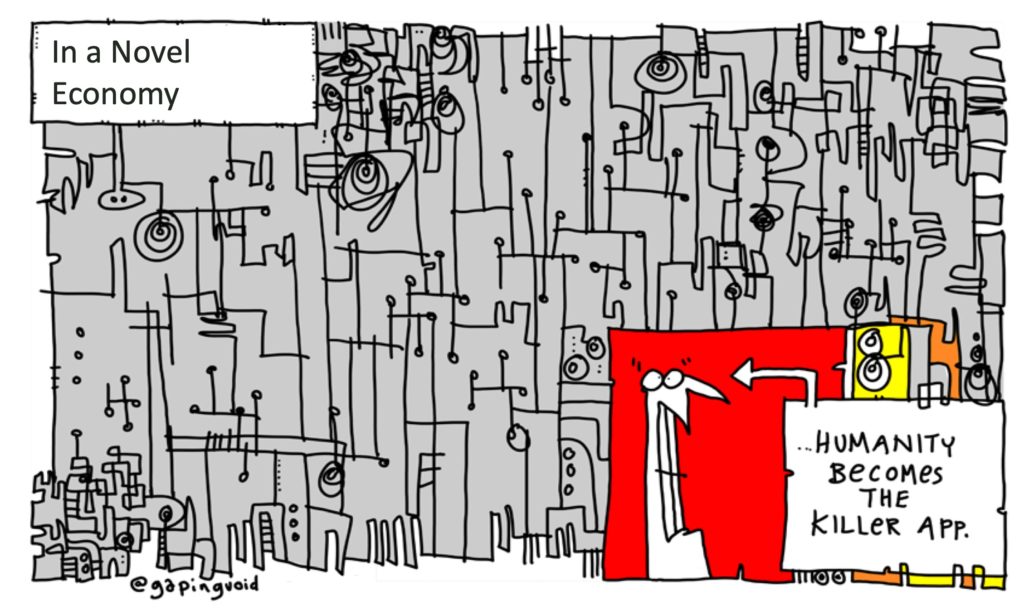 On average, it takes 66 days for new behaviors to become second nature. We have forever changed in the days, months, years following the global disruption of 2020. You can throw your business playbooks, operational checklists, and mindsets out the window.

This is now a Novel Economy. True to its definition, it’s a time that’s new and unusual. It’s not a new normal or a next normal.

While all this is scary for some organizations, it can also be wondrous for those who have long wondered about the possibilities of new ideas, new opportunities, new inventions. There is no going back to “normal”, but perhaps “normal” was what was wrong in the first place?”

What does this mean for an organization’s existing digital transformation?

“Even before the disruption caused by the pandemic, there was a feeling that we were reaching a tipping point, both in terms of the global economic model and how organizations were modernizing. Many established organizations have been too focused on using IT to maintain operations and improving existing processes, instead of creating value to innovate and remain competitive.

The disruption has laid bare the shortcomings of existing business models and transformation efforts. And during the scramble to plug holes and fix what’s broken in their operations, they’re identifying areas that have been missing, including opportunities for real business transformation — both operationally and from a performance perspective, as well as keeping up to speed with today’s digital-first markets.

For too long, stakeholders have only been able to think iteratively to keep going, daunted by more ambitious thinking. “We can’t try that”….“That’s too big”….“That will never work”…“We haven’t got the money or resources”…“We won’t get approval.”

Well now you have no choice — you have to respond now and your response will dictate your performance and define your legacy in the future.”

How do organizations begin to adapt?

“The challenge ahead of us is still huge. The disruption from the virus is still very much with us and is likely to be with us for at least the next 14-18 months. However, there are three key phases that organizations must pass through—Survive, Alive, and Thrive— starting with survival and the creation of a special task force.

This cross-functional team has a hypersensitive focus on reopening the economy by agreeing on immediate investments to be made without politics or agendas. This team works for the greater good to banish infighting and the delays that have historically prevented critical decisions from being made. This team is focused on triaging and setting out roadmaps for the coming days and weeks to support the transition.

The first phase, “Survive”, is a direct response to what’s going on. There has been a massive blow to our markets and how we operate. Organizations are currently treading water, just trying to keep their head above it, making sure everyone is safe, while at the same time trying to keep everyone productive and everything operational.

The next stage is “Alive”. That’s where you really think about the everyday behavior of customers and employees and look into how you scale up operations. What does your back-to-work plan really look like? How do you redesign an office to accommodate social distancing? Where do you put hand sanitizer, testing kits, and so on? How do we ensure the safety of your customers? For years we’ve said to everyone you must become a tech company. Now everyone must also become a health company.

The third stage is “Thrive”. That’s where you begin to rethink the future and begin building the right infrastructure to adapt to this Novel Economy.”

Thu Nov 17 , 2022
It’s autumn in North America, and that means that homeowners and contractors are busy removing suburban leaves. It’s almost impossible to avoid the deafening roar of gas-powered leaf blowers. Here’s what we know, without doubt: Using a leaf blower is bad for the hearing and respiration of the user, often […]