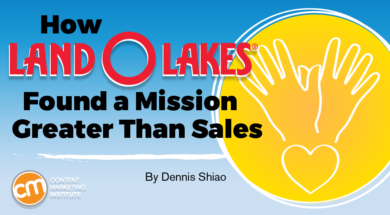 It was a powerful moment. A CNN+ interviewer asks Beth Ford, “What is the purpose of your life?”

She replies: “I hope I will know success by the number of lives I’ve touched. I hope by changing somebody’s story, by helping them succeed – if that’s what my life is and ends up being, that is going to be the best joy of my life.”

Beth is CEO of Land O’Lakes, a farmer-member-owned company with businesses focused on agricultural production and consumer foods, including the famous butter.

She shares with CNN+ what she sees beyond business in that rural landscape: “I cannot tell you how painful it is to watch a family have to struggle or to hear that they’re doing their hardest and to worry how they’re going to feed their own kids.

“Seventy-eight percent of the counties in America that index as food-insecure are in rural America … And it’s just not right. I don’t see why we say it’s someone else’s problem. This is an American issue. It leaves us less secure.”

How did Beth and Land O’Lakes become such fierce advocates for the American farmer? And how did that lead to the CNN+ interview? That story was told by Kim Olson, Land O’Lakes chief communications officer, at Content Marketing World.

Let’s rewind and start from the beginning.

While the work in earned media and communications started as soon as Beth was named CEO, it more recently has been amplified and framed in enterprise purpose work led by Chief Marketing Officer Heather Malenshek.

Kim explains: “Less than 1% of the population is involved in agriculture, but 100% of us have to eat. We used to talk about farmers around the dinner table. Someone had an uncle or cousin that was out on the farm. Not anymore.” 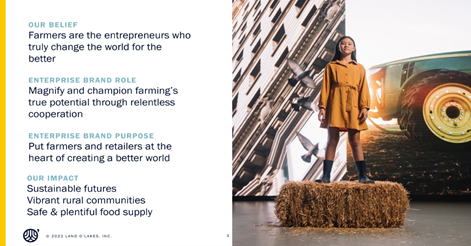 Create a persona of the brand

To personalize the brand purpose and make it more tangible, the company created a persona – Maverick Advocate.

Maverick Advocate portrays bravery and resiliency, using its brand voice for good. The character does not destroy a system but makes it better. Kim says Maverick Advocate leads with the kindness and compassion that resilient, kind, and family-oriented farmers appreciate.

Beth, who became the president and CEO in July 2018, in many ways embodies the Maverick Advocate character. A few months after she started, she dined with farmer members who talked about their day-to-day lives. Beth asked how they made use of opportunities for additional economic, educational, and health-care digital resources. To her surprise, the farmers said they often didn’t have opportunities because they don’t have access to internet connectivity.

@LandOLakesInc CEO heard farmers didn’t have access to the internet, prompting the brand’s American Connection Project according to @BethFordLOL via @kim_l_olson @dshiao @CMIContent. Click To Tweet 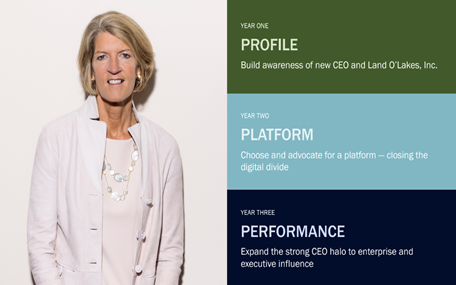 The first year focused on building awareness of Beth as the new CEO and the Land O’Lakes brand. The second year centered on driving advocacy for closing the digital divide. Building on the success of years one and two, the third year focused on performance – expanding the strong CEO halo to enterprise and executive influence.

The awareness phase focused on high-profile speaking events, media opportunities, and op-ed articles, Kim explains. In one of Beth’s first appearances, she spoke at the Economic Club of Chicago. Beth discovered people were receptive to her message and largely didn’t know about the issue.

On the communications side, Kim focused on forming a strong, unified, and consistent message across media placements in local, regional, and national outlets. She says when working with the media, momentum is key. A few initial placements lead to more, usually more high-profile placements.

Kim worked with Beth to convince the broader leadership team about the opportunity. (After all, a story on 60 Minutes isn’t always that flattering for a company.) 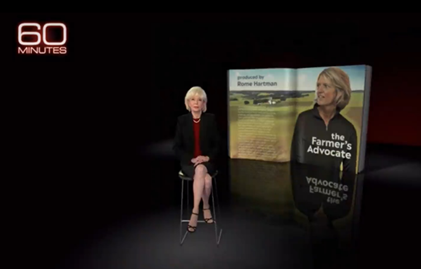 They invited 60 Minutes to a member’s farm in Pennsylvania to see the dairy operation. They involved Land O’Lakes chief technology officer Teddy Bekele to discuss broadband and the digital divide. The team helped 60 Minutes tell the story of what’s happening to farmers in rural America.

The program aired in October 2019 and it was a big success. It generated a lot of awareness and opened the door to more opportunities.

In year two, Land O’Lakes launched the American Connection Project (ACP) initiative to generate awareness and advocacy to address the digital divide. An ACP policy coalition included 177 companies from multiple industries that all agreed to the importance of broadband access for rural communities.

Joining with the 140+ orgs in the American Connection Project Broadband Coalition, we sent a letter to @POTUS + congressional leaders urging them to invest in broadband to close the #digitaldivide and ensure that we #ConnectAllStudents: https://t.co/E016dlBrZs pic.twitter.com/ldzpVmEjI2

These efforts culminated in November 2021, when Beth joined others on the White House lawn when the president signed the historic infrastructure bill:

This is a historic moment for our country, @LandOLakesInc farmer- and member-owners and their communities. Thank you to everyone who worked together on a bipartisan basis to get these critical investments in roads, bridges and #broadband to the President’s desk. pic.twitter.com/g1N8rLPB7L

During the pandemic, broadband access became more essential, heightening the seriousness of the digital divide. The Land O’Lakes team and their members, partners, and the coalition took action. Tina May, Beth’s chief of staff and vice president, rural services, led efforts to expand the American Connection Project.

Many provided free Wi-Fi access to their networks in their parking lots. The American Connection Project members and other Land O’Lakes partners rallied to provide free Wi-Fi access. In all, people could access free Wi-Fi at 3,000 locations.

The action didn’t stop there. The American Connection Project added more initiatives. American Connection Corps brings in young fellows who go back into rural communities to talk about digital connectivity and help workers improve their skills. The fellows also provide planning and consulting to these workers. The first initiative took place in Aberdeen, South Dakota.

In a follow-on phase, Beth and members of the executive team elevated the collective voice and influence of Land O’Lakes to the broader world of business. Their earned media coverage featured numerous members of the C-suite, with placements in MarketWatch, VentureBeat, National Rural Business Summit, and. 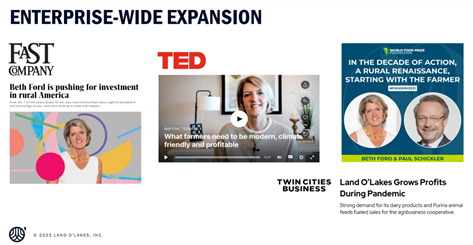 Beth now sits on The Business Roundtable, a nonprofit association eWeek based in Washington, D.C., whose members are chief executive officers of major U.S. companies. Beth has earned coverage in broader business publications, such as Fast Company and TED.

Be the next Land O’Lakes

At first blush, you might think, “This is a great story, but Land O’Lakes is a Fortune 500 company and this doesn’t apply to me.”

But it does. You can apply several things from this story to communications in any-sized company.

Land O’Lakes strategy was about the audience, not sales. How can you help your target audience’s lives?

Land O’Lakes didn’t execute its mission alone. It partnered with over 175 companies to join the cause. What businesses, organizations, and people could help you achieve your audience-focused mission?

The other key to being like Land O’Lakes? Remember, they took over three years to execute it. Create a detailed plan but make sure it’s long-term.

Top 7 Communication Apps In 2022 For Android And IOS

Tue Nov 22 , 2022
Explore the 7 best Mobile Apps for Communicating using your Smart Phones.   Gone are the days when we use to depend on SMS for sending across important information or messages. Today in the time of smartphones & so much dependency on the Internet, people hardly even think of dropping […]